CAUTION: this page simply describes the ideas and discussion of the first iteration of the DAM 2.0 & CMIS implementation effort. Some things are still up to date - others have been changed completely.

The objective is to have a CMIS integration for our DAM module, both for exposing the DAM over CMIS and for connecting to a CMIS server.

As a user I can browse assets on a CMIS server in the Assets app.

As an editor I can use assets from a CMIS server in my pages by selecting them in a dialog.

As an administrator I can configure one or more CMIS providers in the DAM.

As of January 22nd were shifting focus from the assets app onto the choose dialog. This is driven by the realization that browsing a read only external server is of questionable use. It's more relevant to have different sources to pick from in the choose dialog.

It will still be necessary to build this UI, at least for providers with a folders and files layout, using our standard components that we use for content apps.

Also, in order for renditions and linking to use properly we will need to have proper providers. They will just not be accessible from the Assets app.

Write operations on a remote CMIS server is out of scope. Note that this contradicts using the Assets app on top of the DAM API only and tying the CMIS server to the DAM API rather than the DAM workspace. (UPDATE: both of these are out scope now).

Alfresco has a test server that we can use for testing. http://www.alfresco.com/cmis

Imaging module that can work on images from the dam.

Out of scope is:

A mechanism for serving assets from any provider, similar to what the URI2Repository mapping for DAM does now.

Extension to the Link api that supports linking to assets.

Updated RichTextField that can use and save references to assets from any asset provider.

For the App we see a plan in two steps:

We need a number of improvements to the DAM API to make it capable of supporting the needs of the Assets app and the CMIS server.

The DAM API needs to have a concept for folders to make the assets navigable. Folders do not have metadata and cannot be linked to (href links, referencing them is supported) nor do they have renditions.

We will introduce a new interface in the API called AssetFolder and a number of additional methods related to folders, primarily on the AssetProvider interface.

Currently we only have support for reading assets. We need to expand the API to allow for:

Should we have operations for copying and moving between providers?

Not all providers will have the same feature set. We need a mechanism in which users of the API can test for certain capabilities.

A dedicated type returned by the provider with query methods for each capability. The advantage being that it can have methods return boolean, integers or enums where a set of responses make sense. Such as NONE, SOME, ALL.

Use a key-value based approach that is extendable to allow for querying for properties not explicitly defined in the api. i.e new providers exposing capabilities that have not been defined before-hand. This should not use enums.

We currently have an AssetFilter class with basic properties for searching for specific assets. It contains a string that's used as an addition to the where clause. This will obviously not work for other providers,

We could allow for passing the extra where clause in multiple languages, where JCR-SQL2 would be one and CMIS would be another.

Paths must be strictly validated to not allow bypassing security by adding in . or .. references.

Deleted nodes need special attention, we might need to make this part of the api.

There is currently no way to configure providers. The registry is hard coded to have only the JCR provider.

An observed manager that looks for asset providers under each module node.

We use the config node in the dam module. This has the benefit of making ordering easier.

We should make it possible to configure which media types are contained on a certain provider.

Renditions are provided by implementations of the AssetRenderer registry. Every media type is tied to a particular renderer. There is currently two renderers, JcrAssetRenderer that simply generates a link starting with /dam, no resizing or other image operations are supported. The other is STKAssetRenderer which is described in the section on STK improvements.

We need to have renderers that are provider independent.

JcrAsset opens an input stream always, whether its used or not. It is likely not closed properly.

JcrAsset should not act like a DTO, it should delegate back operations to the provider for operations such as opening the input stream.

The assets app works directly on the JCR never going through the DAM API. As we add more providers this has to change to make it operate on remote data.

Expand the DAM API enough to make it support the entire feature set of the Assets app.

This includes activation and dealing with deleted nodes. We would basically need to write new actions that call into the jcr asset provider where it does the same thing as the current actions.

Allow the app to have custom views per provider allowing for an optimized user interface.

The JCR view would be identical to what we have now, accessing the JCR directly. For CMIS we would have a new view that would use the DAM API only. It would be usable against all providers with similar functionality as CMIS.

We must also update the choose dialog and give it custom views.

This mockup shows what we're aiming for. Note the tabs for each media type and the source selectors beneath within each tab. 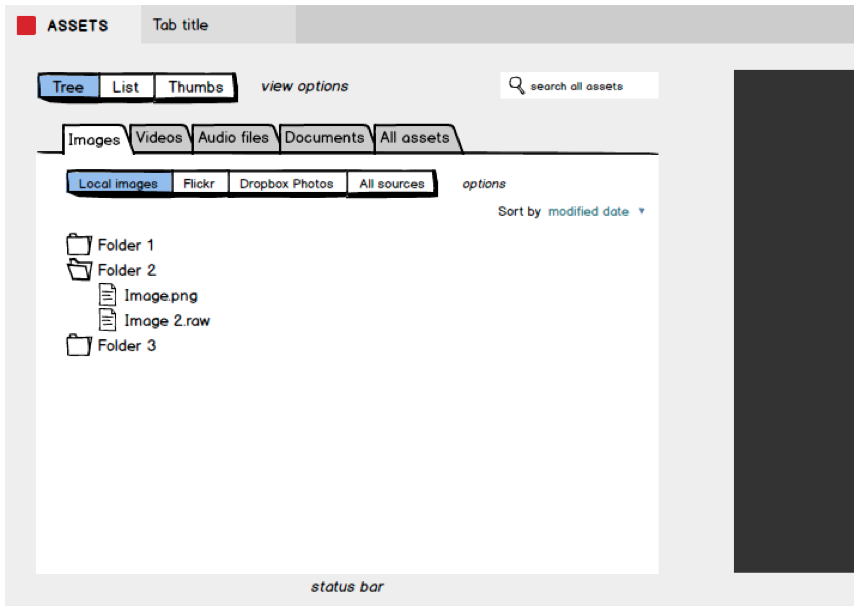 The CMIS provider should be able to communicate with a CMIS server using both the web service and the atom binding. It should be possible to specify a path within the remote repository to use as root path.

There's a number of things we need to decide on here:

Should we support a model where a customer has a public and an author cmis repository and wants to use activation to transfer from one to the other?

We would want to prevent activation of a page if its using an asset in CMIS that hasn't been activated.

The activation status must be a available on the asset.

There's two options here, we could decide to support both or support just option 1 to begin with.

TODO can we support the full dublin core this way?

CMIS has its own query syntax. How we can map onto this in the DAM API?

The server has to be easily configurable

CMIS Client module has to implement the AssetProvider interface.

Essentially the same as the 4.5 compatible module but fitted for the DAM workspace instead.

Every provider in DAM is exposed as a CMIS repository. All functionality that we want support needs to be available on the DAM API.

A direct access to the DAM repository is currently performed. New Implementation step will involved the usage of Assets Provider to expose Assets.

Implementation is pushed under: https://git.magnolia-cms.com/gitweb/?p=modules/cmis.git;a=shortlog;h=refs/heads/magnolia-module-cmis-2.0

The rich text field stores references to assets it links to. It must be able to support linking to asset from any provider. It is currently hard wired to work only for JCR assets.

Update / Review the core Link API. This API has to be able to handle Asset's composite keys.

See the section on UI improvements.

STKAssetRenderer uses imaging to resize, crop and transform images. Imaging is tied to the JCR and can't be used for assets from other providers.

We need to redesign this. 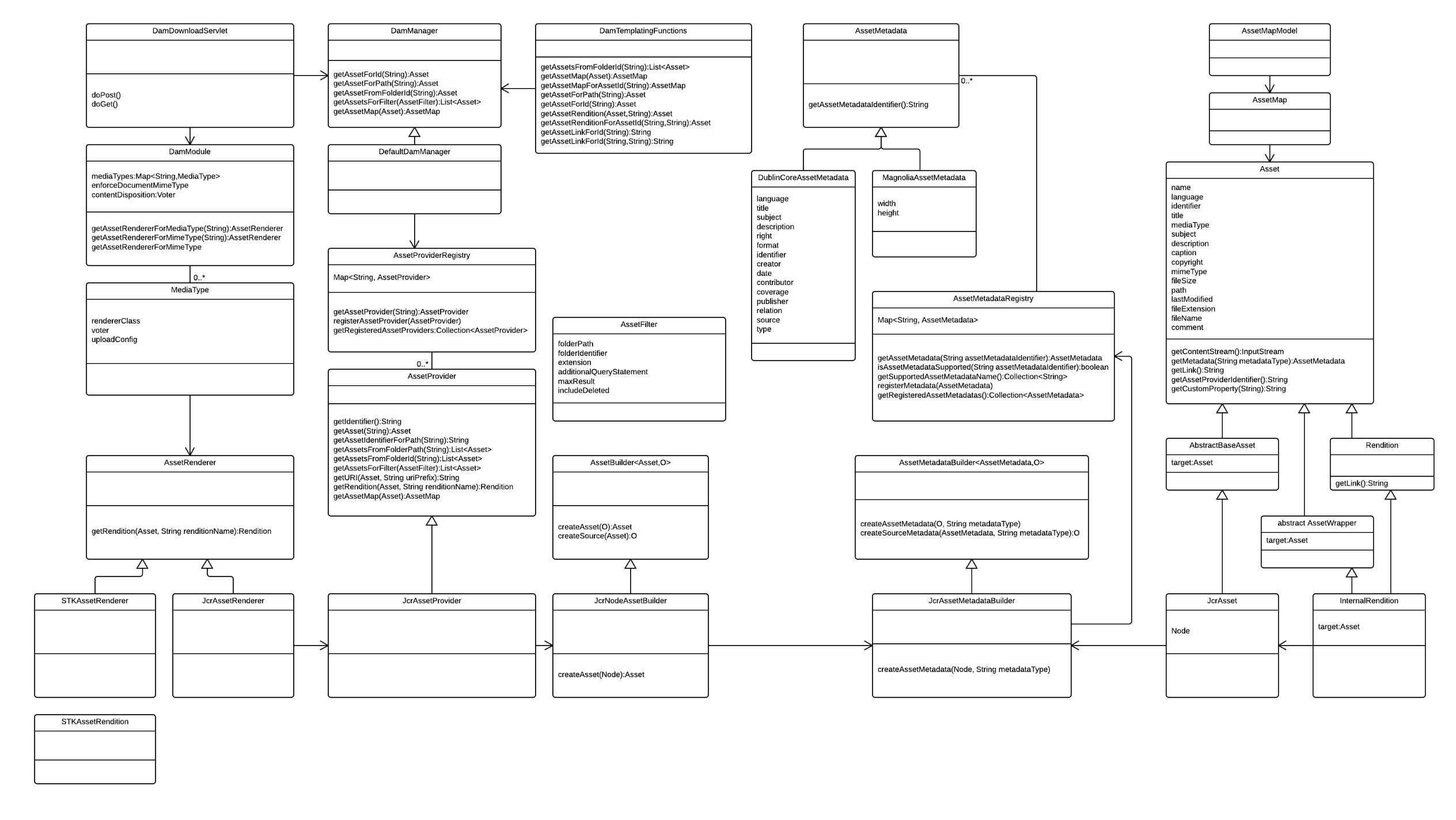