I created this page to provide an easy way of understanding how JBoss works and how to get it working with Magnolia. This page is not a comprehensive analysis, but will continue to grow as I learn more about it. I will provide some helpful information on how JBoss is structured and what files and folders are relevant for our purposes.

If you would like to see these steps without the details, please see the Quickstart Guide here instead : Magnolia Quickstart With JBoss.

Since we mainly use Tomcat, I will try to compare some JBoss concepts and terms to some Tomcat or Magnolia terms so that you can have a reference as to how a certain file or function works.

It was very confusing for me to understand what JBoss, Redhat and all those names meant. So I’d like to start by defining these to clear up any confusion.

JBoss AS is also the development name of JBoss - it is the core, similar to saying “magnolia-core”.

1 - Determining Which JBoss Version To Use

Here is an example:

If someone is using JBoss EAP 7.0 to deploy Magnolia, you will need to use Wildfly 10 as its counterpart.(1)

2 - Determining Which Java Version To Use

You then need to verify with Magnolia’s certified stack to ensure that the Java version is also compatible with the Magnolia version you wish to use: Magnolia Certified Stack.

I’d like to use Magnolia 6.2 with Wildfly 10. I see that the certified stack does not include the usage of Wildfly 10 with Magnolia 6.2. I then have to change my JBoss version to be using Wildfly 11.

Once you’ve determined what version you need, you then need to use one of the following links:

Versions Below JBoss EAP 7.0 / JBoss AS

If you are using a version below JBoss EAP 7.0, then JBoss AS is its community counterpart. You would then use this link: https://jbossas.jboss.org/downloads.

Versions With JBoss EAP 7.0 and Above

If you are using JBoss EAP 7.0 or above (Wildfy 10 is its community counterpart) 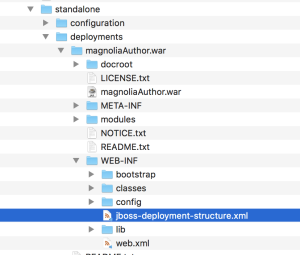 Now that we have all of the configurations set up, all that is left to do is to deploy Magnolia. Normally, JBoss will check to see if any WAR file is present within the standalone/deployments folder. Since we’ve exploded the war and placed it in a folder, it does not detect that there is a WAR to deploy. We now have to tell JBoss to deploy the contents of an exploded folder.

Every deployment you will notice that this file will change to have the suffix .deployed of .failed. To redeploy, you would just rename any of these back to .dodeploy. These are considered "marker" files and are used by JBoss as instructions for deployments or to provide statuses. If interested, you can click on the README.txt found in the deployments folder for more information on what those suffixes mean.

Open a console window and change directory to “<JBoss_folder>/bin”. And execute the following command: ./standalone.sh

The page name is the name of the folder you created. Similar to Tomcat, in the above example, the location will be: localhost:8080/magnoliaAuthor

You can shut off the server by doing ctrl+c on the console that you started the server with.

More Information on the jboss-deployment-structure.xml

This is the same file used earlier.

Magnolia takes care of getting your databases set up. You would do this via the various jackrabbit-bundle files located within the WEB-INF/config/repo-conf folder.

More Information on the modules.xml

We do not need to edit this file, but understanding what it does can help further understand what we are doing. We can compare this to a Magnolia module’s POM file. Let’s open one to see how it looks like. Try going to this file path so that the below explanation can make more sense. In this example I will use the file located within modules/system/layers/base/org/apache/lucene/main.