This page is intended to present some ideas and create a discussion space around the topics of ContentViews and Chooser Dialogs.

In an app, ContentViews are the different ways of looking at the app's content. For example, the pic below shows the three content view buttons of the Assets app. Currently selected is the "tree view", but you could also show the content in "list view" or "thumbnail view".

What are Chooser Dialogs?

Chooser Dialogs allow a user to choose some content from an app, for example for use in another app. Typical use case would be to pick an image from the Assets app while editing content in the pages app. A Chooser Dialog looks like this: 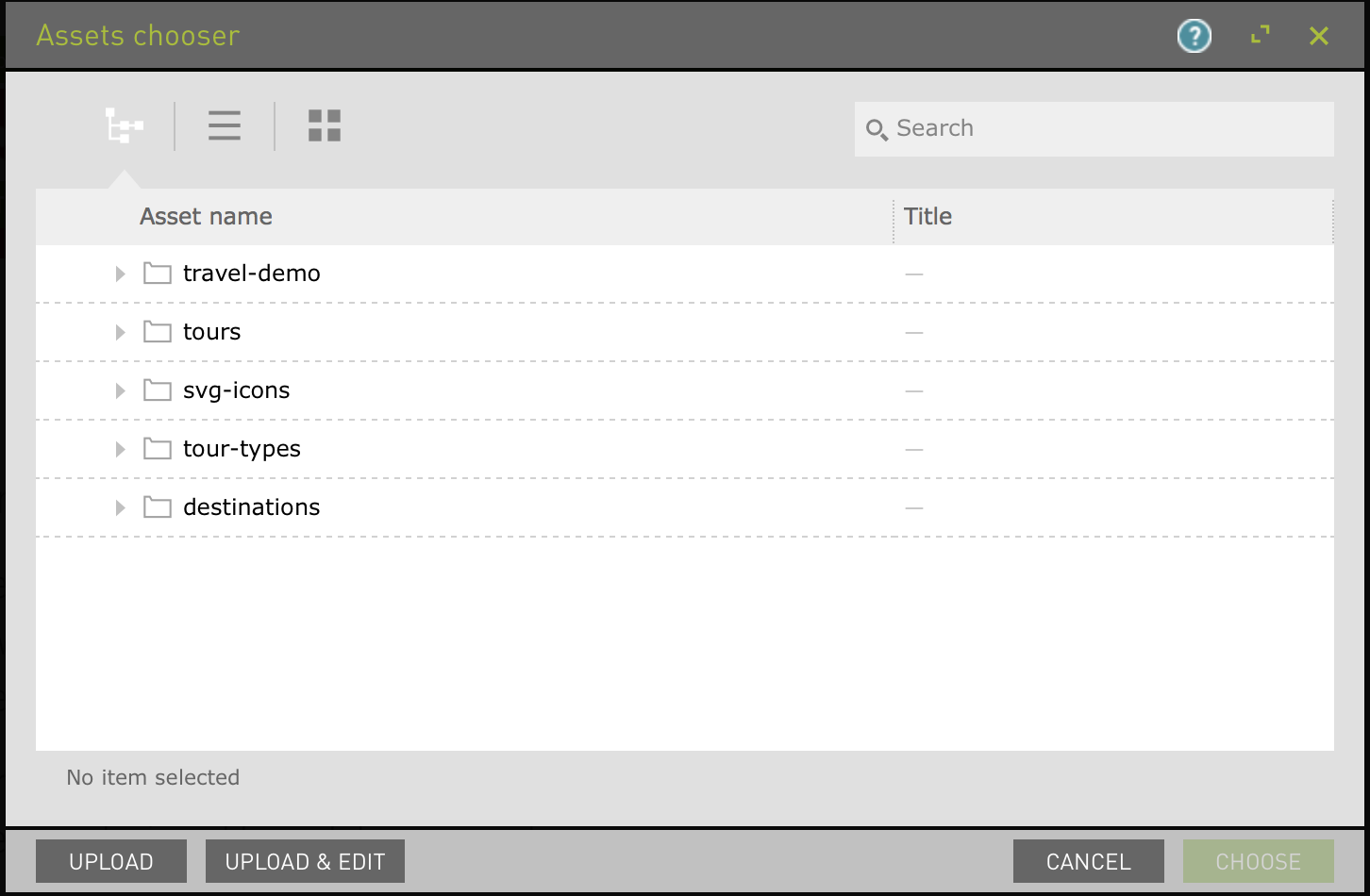 Note that the chooser dialog, like the app itself, also uses the ContentViews to show the content.

Unfortunately there are a number of problems around ContentViews and Chooser Dialogs that I have identified based on personal experience and customer feedback. The magnolia projects I am involved in are now using magnolia 5, and depending on the project have up 150 editors of varying levels of computer skills. Some of the websites managed by these editors are "big", the largest has 10000+ pages, with the DAM (Assets) containing >100GB of data storing >20K assets in total.

As mentioned, the editors have different levels of computers skills. Typically they are experts in another domain, and have to edit content as a "side task". Computer operations which may seem trivial to an experienced developer (simple things like finding an asset in DAM) can be quite difficult for users who are not so comfortable with computers, and only use the system every few days.

So what are the problems?

The "tree view" ContentView is quite useable. It opens quickly for all workspaces, regardless of the amount of data stored there. It works more or less as the users expect. The following problems were identified:

List view will not be discussed in detail, since it is essentially useless. The only purpose for list view is in combination with search, for displaying search results. Otherwise, there is no situation in which the editor would want display all the content of a workspace as a flat list.

In addition, for workspaces with large amounts of data, list view is not functional - switching to list view freezes the front-end UI and causes high load on the server. The reasons are still being investigated, but I think this happens when the amount of content is so large that magnolia needs a large amount of time just to get the total item count from JCR.

Personally I think that to offer an "image picker" where the editor has no way of seeing the images is ridiculous, and cannot be considered a good solution.

So how can we solve these problems? This page exists to think about that, and here I present some initial thoughts I have had on how to improve the situation.

This is not so easy. In theory, you could display a thumbnail instead of the icon for the asset, but in practice I think that will be too small a thumbnail to be useable. An alternative might be to have the thumbnail only on mouse-over. Below are some mock-ups to visualize this:

Either solution would be helpful to the editors. Perhaps the solutions could even be combined, so that there is a tiny preview thumbnail instead of the icon to get you oriented, and in addition you can hover on the image to see a pop-up preview.

The idea here is to create a replacement for thumbnail view that actually works and is useable. Instead of re-inventing the wheel, lets re-use existing metaphors which have been proven in practice, and which the editors will already be familiar with – explorer view, which works a little bit like "windows explorer". It works like this:

Since I assume you are familiar with windows explorer I think you can imagine what this will look like and how it will work. I personally think it will be a massive improvement for editors, and far easier for them to use since they will be confronted with familiar paradigms. Below is a rough mock-up of this view:

Probably showing the item names under the thumbnails would also be a good idea...

I think this will be a much more natural way for the user to perform the move function than the current solution.