Magnolia informs the user, if an action has started, on its progress and as soon as it has ended. They must be very non-technical, short and to the point. If possible, a final confirmation message when an action has ended shall offer to undo the entire action again.

Action progress notifications provide needed feedback and increase confidence of the user in the interface and thus fundamentally improve the overall user experience.

Furthermore, action progress notifications are strictly related to an action triggered by a user and report when it has started and ended, and show up while it is running to visualize progress. There's only one type of notification and it is of information character.

Action progress notifications must be very short so that they can be read by almost only glancing at them. They are small, clearly visible notes. Only use icons or other visual elements such as a progress bar, if that greatly improves overall readability.

We can distinguish two kinds of messages: confirmations inform the user that an action has started or ended; progress indicators report on progress of actions taking a long time to complete. The former are required for long-running action, while the latter are not if it is difficult to compute or detect progress.

If an action fails or has to warn the user, it must use a standard system message for errors and warnings. Any possibly showing action progress notification must be dismissed before the system message is put up.

If an action terminates successfully, an action progress notification confirms the fortunate outcome. Do not use an informational or status message for signaling action success.

No notifications for common actions

Do not use action progress notifications for often used, common actions such as deleting a file, creating a new page, adding a paragraph or copy\&paste. First, such actions are no long-running actions. Second, they are just expected to work and need not to inform the user of their progress. Finally, the general support for undo/redo in Magnolia 5 ensures also common actions can be undone, even if UX:no confirmation message offers this.

On the other hand, actions such as activating a number of pages or even a single page should show notifications. They may take some time to complete and represent a significant, critical that the user is interested in monitoring.

If a user launches multiple actions at once or in a short time frame, their action progress notifications show up in no particular order. Thus, care should be taken that messages make sense standing by their own and showing up mixed with others. As an example, instead of saying "progress: 45%", an upload action could signal "Uploading file... 45% done".

The final confirmation message shown if on success shall offer a link button to immediately undo the entire action whenever possible. This greatly increases the overall confidence in the user interface. 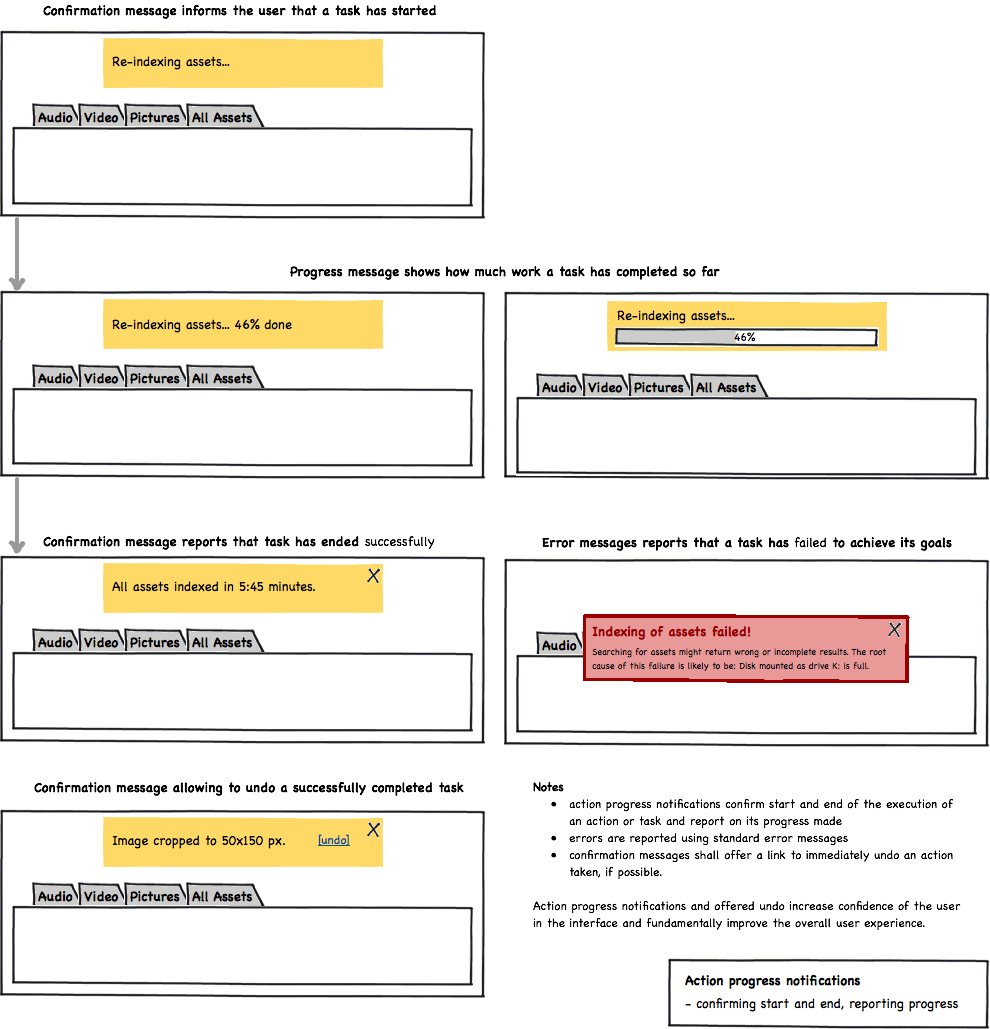