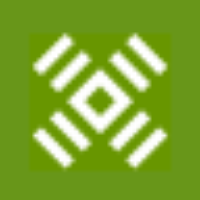 Introduction to the migration

The process is made of several steps. Each step has its own goal. All the steps are represented by Groovy scripts. You can find all Groovy scripts in the module magnolia-4-5-migration.

If your module is based on the Standard Templating Kit (STK) then follow this process.

The goal of this step is to move the templates and paragraphs into their new locations:

If you want to run this step on your module, add your module's name to the collection modulesWithPagesAndComponents in the Migration.groovy script.

The purpose of this step is to prepare the templates for the transformation step. The step operates only on the templates folder, not on paragraphs. If your STK-based module does not have any page templates, for example it has only paragraphs, you can skip this step.

The step makes the following changes in the template definition:

This step is represented by several Groovy scripts. The purpose is to build a map of dialog, template and component IDs. The ID is used to identify and reference the items.

Prior to 4.5, an item name such as stkHome was used as an ID. In 4.5, the name stays but we also create an ID for each item. The ID is of form <module name>:<path to the item>. The first part before the colon (

For example, STK components are in the Standard Templating Kit module so the first part is standard-templating-kit. The relative path starts with the components folder, followed by a path to the component content node, such as components/extras/stkExtrasInternalPage.

This step creates 3 maps containing this qualified name for the dialogs, templates and components. These maps are required by the Transform step. Example map:

If you want to run this step on your module, add your module's name to the collection modulesRelevantForIDCreation in the Migration.groovy script.

Now we are ready for the main migration. This script is the most important script of the migration, it's really migrating from the old world to the new world. The goal of this step is to transform every STK-based template definition (prototype, concrete template and paragraphs). The templating changes introduced in 4.5 are listed in LINK TO OFFICIAL DOCUMENTATION OR RELEASE NOTES.

The entry point is TransformSTKTemplates.migrateSTK, it runs the migration of over all templates, paragraphs and prototypes.

The migration of a template is done by TransformSTKTemplates.migrateTemplateDefinition. It works the same way with a template and with a paragraph, because in the new definition page templates and component templates represent the same definition.

If you want to run this step on your module you have to modify the Migration.groovy script.
Add your module's name to the collection stkBasedModules in the and the path of your site definitions to the collection siteDef.
Then in the step 9. of the main migration add a call to transformSTKTemplates.migrateModulesAndSiteDef(stkBasedModules, siteDef).

Below is explained the logic of this step:

Properties
Update properties to match the new convention. For example, the template type property is now renderType. We update the name of the property, its value or both. See MigrationUtil#updateTemplatePropertiesGeneric.

The screenshot below shows the difference in the promos area. 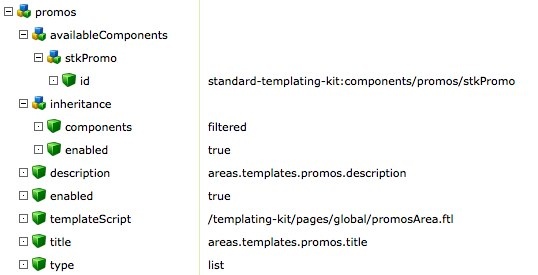 Inheritance
Inheritance is now directly configurable in the definition. An area inheriting content from its parent has a node inheritance with the property enabled set to true.
The components property can have values all, filtered or none.

AutoGeneration
An area (and even a page) can add an autoGeneration node in its configuration. It replaces the former configuration autoGeneratedParagraph but provides a much more powerful mechanism. Before you were able to create only one "single" (singleton) paragraph. But now you can create complex content: a page, an area or a component. Everything inside the content node will be created.

In the screenshot you can see that properties that used to be in the defaultValues node of an autoGeneratedParagraph are now in the singleton node. This node singleton represents the structure of the content to create in the main area of a FAQ page. 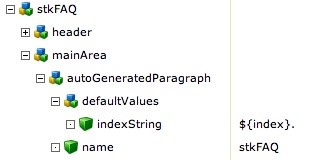 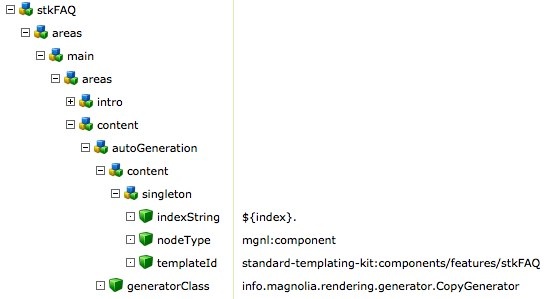 Workspace: config or websiteDependencies: Step 4
Mandatory: No
Groovy class: Provide your own.

An extra task could remove inconsistency, like for example if a dialog is not properly named and all other stuff like that.
This step has to be executed at the very end of the process.

Here is an example of an extra task that has to be performed on the Form module configuration. We have to configure areas whenever we find a contentNodeIterator in the template script.

The contentNodeCollectionName becomes the name of the area. The list of paragraphs in the paragraph attribute becomes the availableComponents list. Since this is an iterator that iterates through a collection of multiple item, the area is of type list. For the templateScript property you can use the generic area script /magnolia-module-standard-templating-kit/src/main/resources/templating-kit/generic/listArea.ftl. This generic script works if the iterator does not write any static HTML elements. If your iterator does, write a custom area script instead. 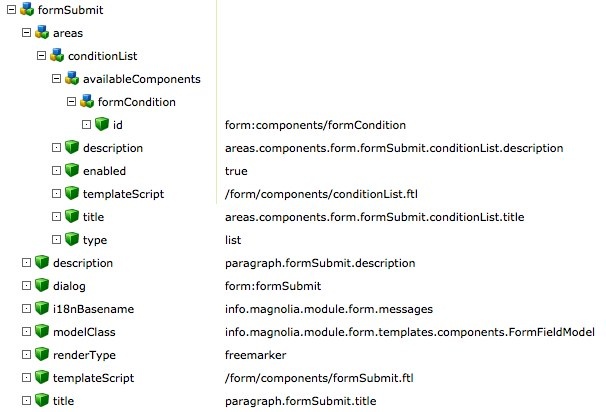 To complete this extra task, change the contentNodeIterator tag in the template script to a cms.area tag.

If you want to run this step on your module, create your own groovy script providing extra transformation, then add a call to your script in Migration.groovy.

An STK-based website is a site whose pages and paragraphs are based on STK templates. This process is executed in the website workspace.

The goal is to change the primary type of each node of a website. New types are Page (mgnl:page), Area (mgnl:area), Component (mgnl:component).

Special case - single areas:
For areas of type single (e.g. stage, opener) an extra task is run. These areas must have node type mgnl:area, but since they contain a template, the logic will transform them into node type mgnl:component, which is wrong. To correct this, the script creates an "intermediate" node between the single Area and its children. This intermediate node is of type mgnl:component and its associated template is the template that the single Area used to have. 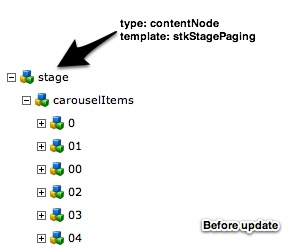 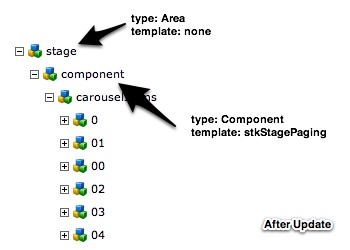 If you want to run this step on your module, add your website's name to the collection website in the Migration.groovy script.

The new value of a template is the qualified name found in the maps of IDs. In this example stkSection is replaced by standard-templating-kit:pages/stkSection.

As we saw in the step 7, the main structure of STK definition has been revised, we moved some areas. The content must also reflect this change, for example the opener node must be within the main node.

We also introduced a new area within the main called content. The content area behaves like main, meaning it is the main placeholder for the content of a page. We have to create this node in the website content structure and move all the former content from the main area into it. Note that we dont move the breadcrumb content node because there was no such node in the content. The same is true for contentNavigation and intro.

The screenshot below shows how the website node structure now adheres to the new template configuration. 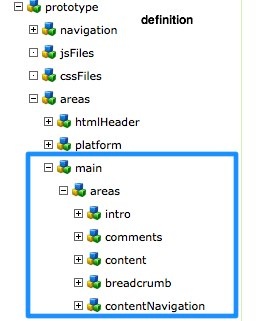 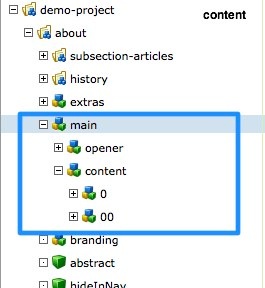 Perform an Extra task step as you would for an STK-based module if needed.

If your module is based on the basic templating framework but does not use the Standard Templating Kit (STK) then follow this process.

This step does minimal changes:

If you want to run this step on your module, add your module's name to the collection transformSimpleTemplatesInModules in the Migration.groovy script.

Perform an Extra task as you would for an STK-based module.

The diagram below represents the steps of the migration process. 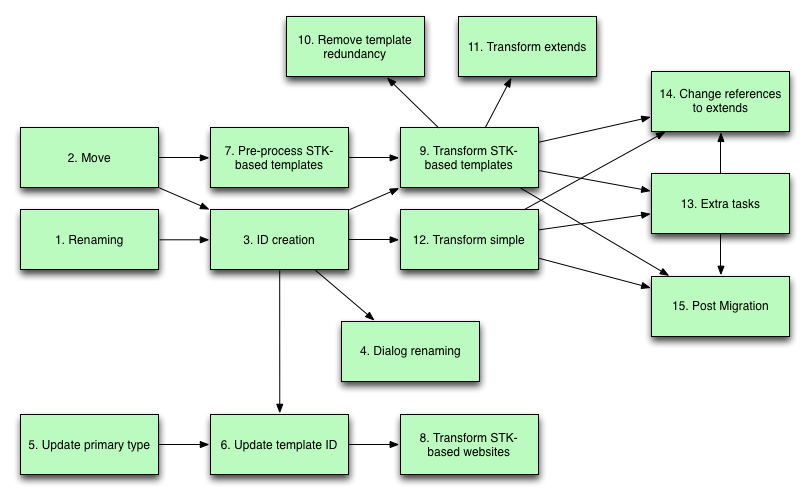 It's goal is to rename nodes in order to reflect the new naming convention.

If you take a look a the method PathChangesImpactingID.mapOfNodesToRename, in dialog the paragraphs folder is renamed components.

If for the migration of your module you want to rename something, you could take this step as example.

Why we do it now and not in the step 1?
By renaming the dialogs and updating their IDs we still keep the reference (key) of these dialogs. Later we are able to update the dialogs in all the templates.

Perform the Update primary type step as you would for an STK-based website.

Perform the Update template ID step as you would for an STK-based website.

Perform the Pre-process STK-based templates step as you would for an STK-based module.

Perform the Transform STK-based templates step as you would for an STK-based module.

If you want to execute this step on your module, check RemoveTemplateToPrototypeRedundancy.doOnModules.

This step introduces an important and handy feature of STK: extends. With this you can simply extend an already existing dialog / component / page definition and insert extra controls or labels. STK as is has a lot of duplicate entries since the extends mechanism was introduced later. This is an attempt of cleaning up these duplicates in an automated way.
This step also creates so called masters that can be extended from various places. Masters are like containers that you can quickly extend in order to create a working dialog. Items that are added to the masters are automatically added to all configurations that extend it.
i18n messages are also resolved and compared with the master values - if they are equal they are deleted to avoid unnecessary redundancy.

extends-override
Sometimes a configuration is almost the same but has one control less for example. In this case you still might want to extend the master and simply override the control that you don't need. There are a few situations where a simple property called extends with value override is not enough or not the correct way to do it:

Perform the Transform simple step as you would for an basic templating-based module.

Perform the Extra task step as you would for a module.

In our case we perform extra tasks on form, public-user-registration and resources.

This steps simply update all the reference property found in the dialogs by extends.

We could assimilate this step to an extra task of the migration of Magnolia. We use this step to do a cleanup by removing useless things, renaming values and all these kind of tasks.