Periscope is essentially created to satisfy the lack of search capabilities within Magnolia. Initial concept had ideas such as speech recognition, vocal commands, image recognition and ranking search results via Machine learning/Deep learning.

It provides API to plugin so called Result suppliers easily into the search result set as well as possibility to create own vocal commands etc. In order to describe what's the current situation and plan  MGNLPER-8 - Getting issue details... STATUS  was created.

More information can be found regarding user stories at: Find bar stories

Also details of ResultSuppliers can be found at: Configure search results

It's scope and further discussion about various ResultSuppliers were discussed in here: 2018-03-01 Periscope scope and Solr discussion

An app has been built to showcase the current situation in periscope-core and it can be found at: https://git.magnolia-cms.com/users/ilgun/repos/periscope-app/browse

Overall architecture is as follows: 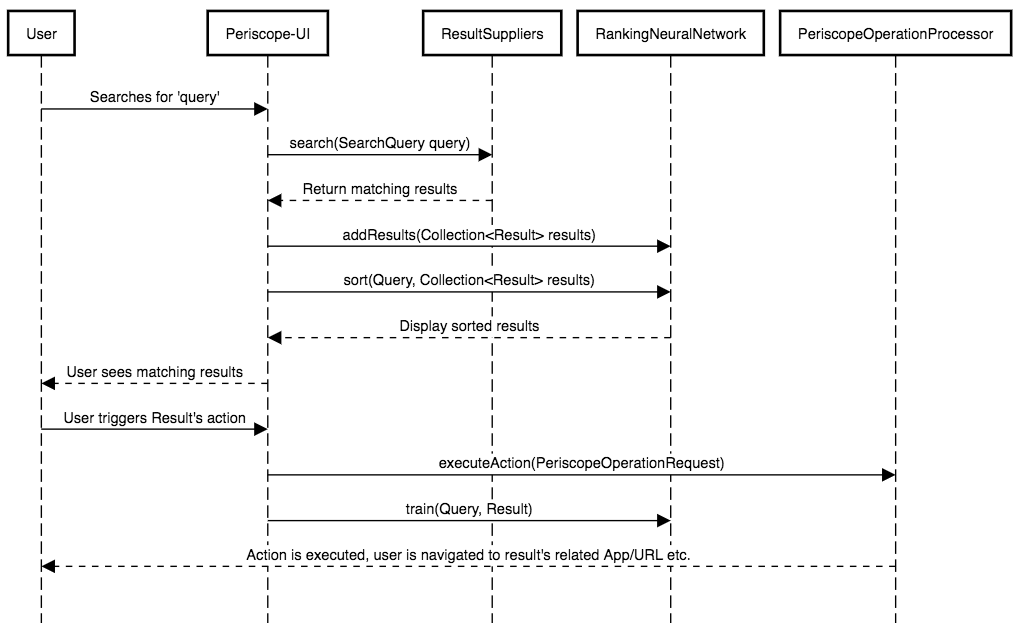 A neural network has been introduced  MGNLPER-3 - Getting issue details... STATUS to rank search results provided by so called ResultSuppliers. It uses DL capabilities and a custom algorithm to do the ranking.

More information will come with:  MGNLPER-11 - Getting issue details... STATUS

Speech recognition is essential for Periscope because due to that we can have Vocal commands. Typically users can speak to Magnolia via Microphone and Speech recognition service is able to translate it into text.

Periscope from that point takes care of the rest and execute the text as if it is a normal text query from user.

Currently, the default Speech recognition implementation uses Web Speech API  MGNLPER-2 - Getting issue details... STATUS  however, although it's in the specification currently it's not really usable from other Web Browsers except Google Chrome.

As of today, Firefox and others have plans to have it in by the time that we release Periscope but there is certain chance that all browsers won't support it.

Therefore we are currently investigating other ways to capture users' voice and use external speech recognition services. There is a Google connector which does it for now and others like Amazon also will be offering a solution in that regard in foreseeable future.

Image recognition is not a direct component of Periscope.

However, Periscope can potentially benefit a lot from it hence our users. Once image recognition services is in, it'll recognise the images in Magnolia and insert the label as tags.

Those tags can be searchable within Periscope, therefore we can satisfy the need of user searching for an image within Magnolia.

As of today, we have a pre-trained local solution which can detect images with acceptable rate. This can/should be a module of its own.

In addition, Amazon, Google or any other service can be used to detect images. Especially Amazon solution is quite cheap now that we could also offer to our customers for free (Magnolia can take the cost and limit it to say 10 dollars per month).

This way our customers will have different options and choose what fits to their needs.

SearchResultSupplier is responsible to provide results to the Periscope. To do so one has to implement the following interface:

One can provide all kinds of results to periscope by simply extending this interface with choice of <T>.

As you see in the example below, results of the Suppliers are wrapped/presented in SearchResult object which contains text and a PeriscopeOperationRequest which specific what should be done when user selects the particular result.

SearchResultSupplier are responsible to provide this information since they know what should be done with their provided resultSet. There is a section below which covers PeriscopeOperations in general.

and operationRequest is the request when user clicks on the desired result from the supplied result set in Periscope.

For maximum convinience we have created JcrSearchResultSupplier which is responsible to search over defined JCR workspace and such. It has configurable capabilities to specific node types or doing full-text search.

One can easily define a JcrSearchResultSupplier via YAML as such:

All you have to do is to specify the class like in the example and specify what you are interested at. For instance here we care about website workspace and node type of mgnl:page. However, we could also define bunch of other node types here since it is a List.

In addition, we define fullTextSearch as true and as the name suggests JcrSearchResultSupplier then will be doing a full-text search within that workspace.

Periscope operations are built with the idea of customisability in mind. Those operations are completely configurable by users and there are also easy to write/customise.

Currently we have five types of PeriscopeOperations:

For instance OpenAppOperation only handles query if it exactly matches 'open pages app', otherwise it will not be doing anything.

Periscope UI generates a ImperativeOperationRequest upon every user query and tries to execute it via PeriscopeOperationProcessor, if there is an PeriscopeOperation which is responsible for that particular query then it's executed. If not we simply delegate to SearchResultSuppliers.

That allows users to write their own operations/actions/commands and easily execute them via Periscope.