After a first PoC done using custom code and a subsequent architecture meeting it was deliberated to use the Resources API instead. This concept aims at investigating some of the questions raised during that first meeting.

A new PoC using the Resources API has been crafted In order to quickly verify some assumptions and help with the investigation. See https://git.magnolia-cms.com/projects/MODULES/repos/groovy/compare/commits?sourceBranch=refs%2Fheads%2Fpoc%2Fload-groovy-resources-api

Maintain additional classpath fallback after the cascade? Such classes would not show in the Resources app, so how can someone edit them?

Apparently such classes do show up in the Resources App. I created a Groovy script in a package classpath.scripts in Eclipse under src/main/resources

and the script is displayed in the app and can be hot fixed with no problem. The funny thing (but it may be due to the cp resource issues being tackled atm or to my borked IDE setup) is that it only shows up after the parent folder is manually created in the app. 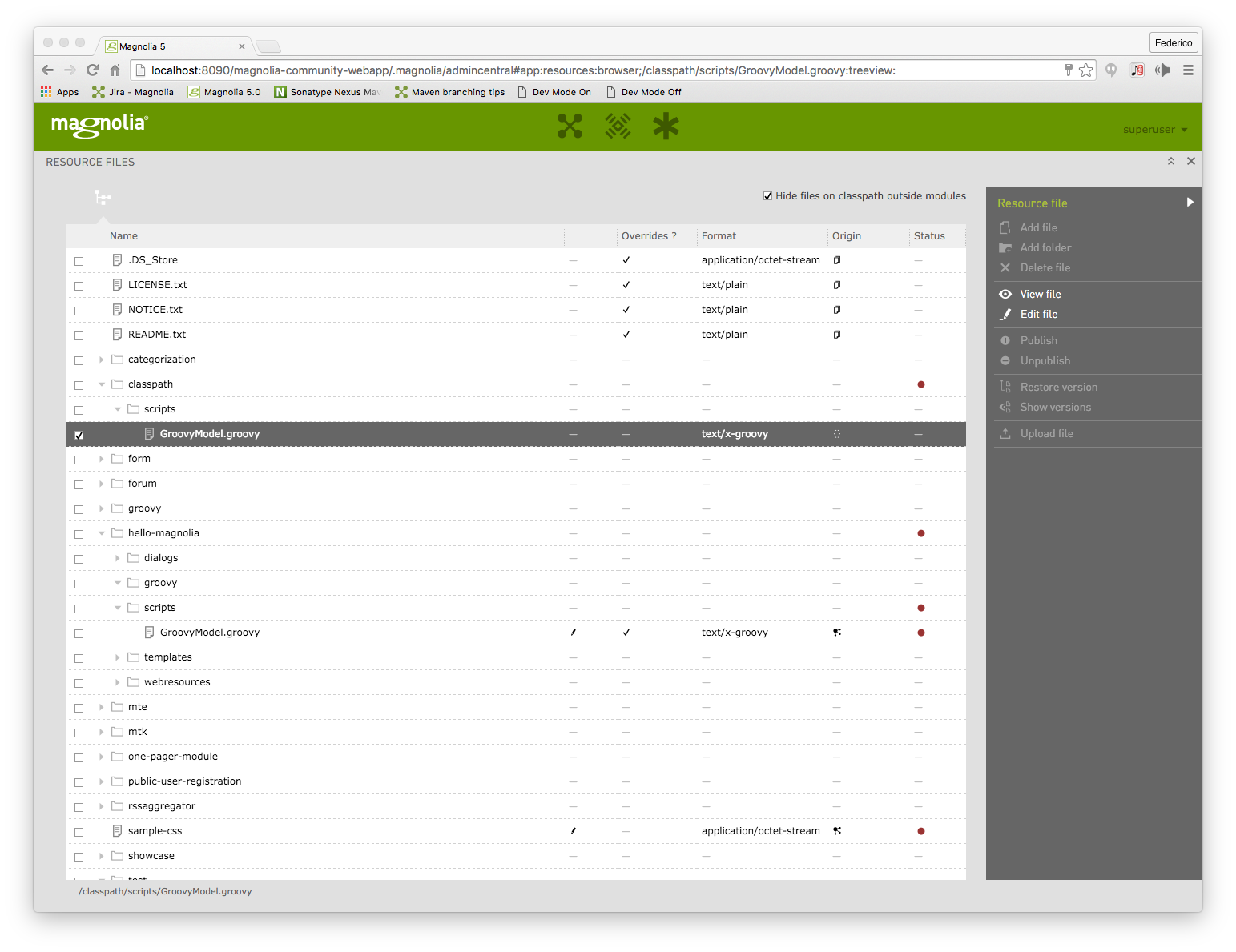 Find a way to load classes via Resources API in deferred manner.

The Groovy module replaces Magnolia's DefaultClassFactory with its GroovyClassFactory which internally delegates loading the Groovy source files to MgnlGroovyResourceLoader#loadGroovySource(..). The latter is therefore called very early during Magnolia startup (it is indeed called internally by the GroovyClassLoader) when ResourceOrigin (the entry point for clients of the Resources API) is not ready yet. That would cause a NoSuchComponentException when trying to get hold of ResourceOrigin via Components.getComponent(..).
Solution in PoC consists in using a ResourceOriginProvider and skip Groovy resources loading as long as the provider is null. This seems to be safe as during Magnolia's early startup phase there are no Groovy scripts/classes to be instantiated and the loading of Java classes needed by Magnolia is delegated to the parent class loader.

As far as I could see, having a special folder in the light module structure, e.g. one called  groovy, would not solve the issue because

Although a little unfortunate, I see no better solution than establishing the "convention" of replacing dashes with underscores in package names in order to have unique paths to Groovy scripts. This convention is also endorsed somehow by Oracle itself https://docs.oracle.com/javase/tutorial/java/package/namingpkgs.html  PM too Christopher Zimmermann seemed to be able to live with it (maybe he even suggested it, can't recall)

Next steps and more questions