Activation is realized as a push system and is divided in two parts. Sender part consists of the Syndicator and Subscriber where Subscriber is a description of the target system. Syndicator is a component responsible for collecting all pieces of information that need to be transmitted to activate content successfully. All such pieces are collected in the object called ActivationContent. The simplest way to initiate activation is using ActivationCommand that will call syndicator to create activation content and ensure such is published to each of the subscribers.
Receiver part is realized as a ReceiveFilter. The filter is responsible for acting upon incoming activation request and storing the data in proper location and order after receiving all the data.

The two possible methods of activating content are supported:

The Content is in this context defined by the filtering Rule used collect all the subnodes that are still considered to be part of the content for any given activation.

Somewhat categorized collection of features activation currently does (or in the future should be able to) take care of:

The issues with extensibility and testability of the current activation code stem from the fact that module is written in very monolithic way, with single implementation trying to deal with all possible use cases.
The source of performance issues is over simplification of the process by stacking the commands in a chain without taking into account the amounts of data each command needs to handle separately.

The diagram below lists the current state and possible future implementation. The elementary steps are more less the same, the main difference is always chaining the commands only at the level of single content. 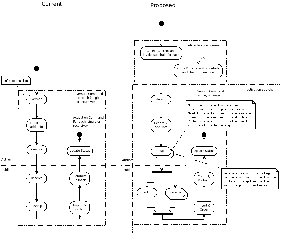 While on first sight it seems that use of JMS would be a great idea, there are some shortcomings of such solution that need to be thought out first:

I think its worth to explore possibilities of JMS to use it for activations. However there is a downside for this solution - customers will need to set up new server with some sort of a storage (disk, database) where messages will be persisted.

Jackrabbit provides its own implementation of rmi to communicate with another repository remotely.  It looked like a good idea to use this implementation, however there are some difficulties that would require quite a lot of effort to overcome

Imho this is not a way to go. It would be difficult to notify public instances when to rollback, commit, also public instances would have to report to author if activation was successful or not. We would also need to solve authentication to the remote repository.

Using of sockets would require to re-implement everything from the scratch. Positive thing is that we would have everything under control. Unfortunately there are these downsides:

Clustered repository for author and public instances is another idea how we could implement activation. However we would have same problem (as with JCR-RMI) - how to notify all author or public instances. Another thing that should concern us is repository corruption. This would definitively cause a lot of troubles to the activation process and it might happen that whole activation would broke up and nobody could activate anything.