This concept is meant to illustrate what is needed in technical terms in order to implement the new UX Pulse concept with particular reference to the workflow.

At the moment, work items or tasks as we will call them from now on (work item is very jBPM specific) are treated like any informational Pulse message (i.e. errors, warnings) and there's no way to know what the status of a given item is, unless one tries to perform an action on it. What's worse, one can delete a work item without handling it, which might basically break the workflow, leaving a process pending forever, unless some other user in the same group the task has been assigned to, takes it over.

The UX concept puts special emphasis on the handling of workflow tasks, how to display their current state (i.e. who's in charge, whether it has been already handled or not, what the outcome was, etc.), how to perform the necessary actions so that each workflow process can be successfully carried through. It also worth mentioning that, as specified in the UX concept "The user does not see the entire work flow and its current state in Pulse - there's actually a separate app for that".

Of the many new things introduced by the Pulse UX concept, it was agreed that the first thing to tackle, which would solve most of the problems currently affecting the workflow, is the new Tasks inbox. As illustrated by the mockup below, the main novelty is the sub tabs (all items, not started, ongoing, done) introducing filters displaying the status of the each task assigned to the current user or the group he or she is part of. An additional status column has been introduced too. 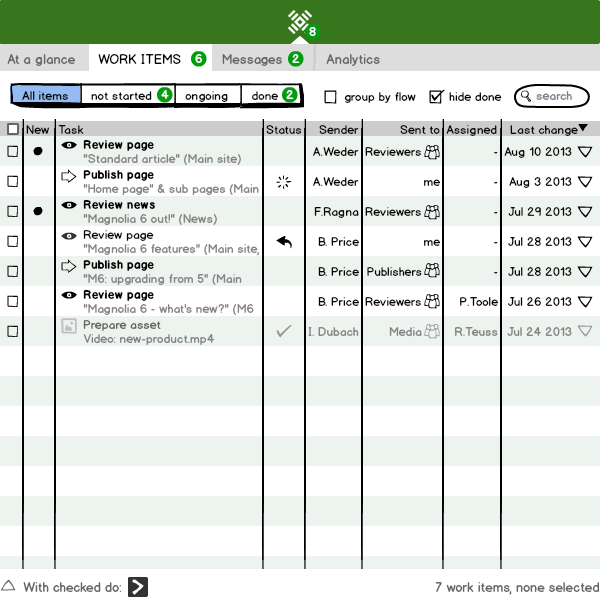 What is a User Task?

From the official jBPM documentation:

Processes can also involve tasks that need to be executed by human actors. A User Task represents an atomic task to be executed by a human actor. It should have one incoming connection and one outgoing connection. User Tasks can be used in combination with Swimlanes to assign multiple human tasks to similar actors. Refer to the chapter on human tasks for more details. A User Task is actually nothing more than a specific type of service node (of type "Human Task"). A User Task contains the following properties:

Instead of using human tasks for interacting with human actors Magnolia decided to leave this concept out and use Service Tasks for sending messages to The Pulse.

But what exactly is the difference between a Service Tasks and Human Tasks?

From a technical point of view: None.

Both Tasks are handled by a WorkItemHandler which implement the same interface.

When modelling your process it does matter. A User Task gives you much more possibilities to set parameters tailored for user interactions: 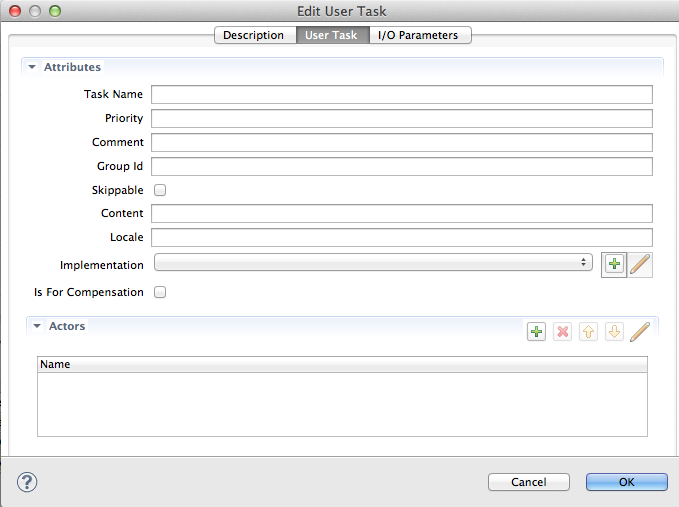 Note: Human Tasks allow setting a Task Name, which could be used to define the further visual representation or the actions available for a certain task in Magnolia. This is not the case for other Service Tasks, which is why you end up creating a handler per service task. What the Implementation field can be used for has to be clarified.

What the Handler does internally is:

At this point the WorkitemHandler is finished. It does not complete the WorkItem and for now the process is paused at this stage. Even more the whole execution of the task is decoupled from the process execution and has a completely separated life cycle. This lifecycle is taken care of by the TaskService.

Because the User Tasks lifecycle is decoupled, the process needs to be informed when a task has been completed and allow the process to proceed its execution. This is is done exactly the same way other tasks are completed inside the process by notifying the WorkItemManager (manager.completeWorkItem()), but as part of the HTWorkItemHandler it is triggered by an event fired by LifeCycleManager and handled by e.g. org.jbpm.services.task.wih.ExternalTaskEventListener#processTaskState. The Listener is registered when registering the HTWorkItemHandler inside the RegisterableItemsFactory.

This diagram shows how User Tasks are persisted in JPA. Please compare this with the current implementation to see where Magnolia's implementation can easily be extended for a custom TaskService implementation. 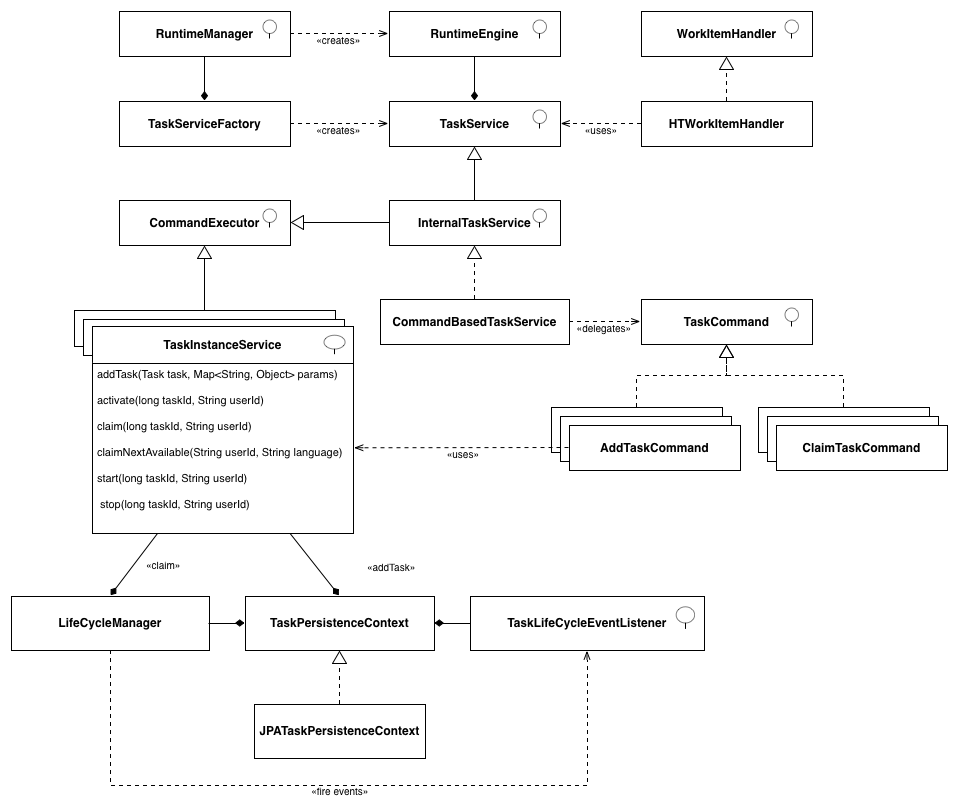 Introduce own implementation of TaskService which delegates to Magnolia's TaskManager.

By choosing this approach we would sacrifice the idea of having a complete integration of jBPM (in case that idea ever was there..) in Magnolia. But, as part of workflow 5.3 we have laid the ground to hook into jBPM's engine at the right spots and provide custom, yet slimmed down implementations targeted towards our needs and most probably towards 97,6% of our customers needs. Still if somebody would need to have the full persistence of User Tasks as specified by jBPM registering the default CommandBasedTaskService based on a custom TaskPersistenceContext is possible, in theory. 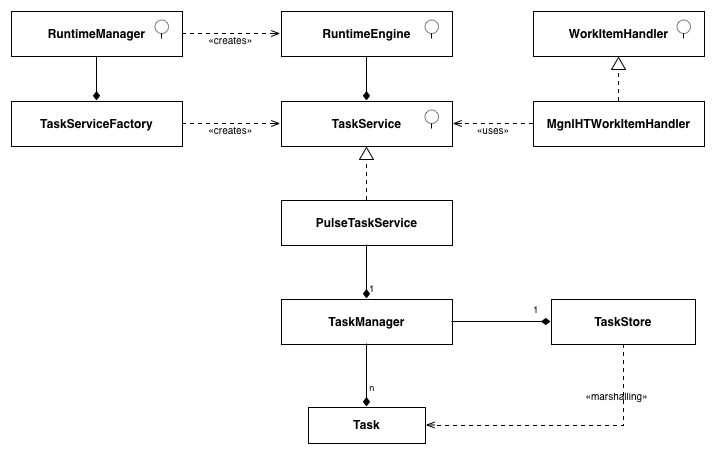 During implementation we realised that this will be more complicated than necessary. While registering the TaskService to the RuntimeEngine would be nice, the gain is not much more than being a bit more consistent with jBPM. And when looking at the TaskService interface we would somehow have to wrap a lot of objects to work with our own Task's implementation, which should be part of the UI.

So instead of implementing this the TaskService interface and registering it to the RuntimeEngine we are going to create a custom TaskManager interface (naming due to consistency with MessageManager/MessageStore).

This approach allows a very slim integration with Magnolia's TaskManager. The whole Task Management is a standalone, reusable part of the UI project and for jBPM we communicate with the standard TaskManager interfaces using the HTWorkItemHandler and event handlers registered to the TaskEventmanager

3.4.2014: Task related classes should go to a separate module in main

Accessing the TaskManager is different than in jBPM. In jBPM the TaskService is bound to a RuntimeEngine and can be obtained like this:

This will not be doable with our approach.

How to extend the Task object by workflow specific parameters, how to store it?

By implementing a JCR implementation of the TaskPersistenceContext we would be able to create a complete storage for User Tasks. This would be the recommended approach in case we wanted to provide a complete integration of jBPM in Magnolia where customers would be able to take full advantage of jBPM and possibly also integrate 3rd party clients to connect to Magnolia's engine.

Having the persistence in place still leaves questions open on how to actually interact with the tasks. We would have to access the stored tasks, and provide a limited set of possibilities to manipulate them.

The JPATaskPersistenceContext alone is around 550 LOC and all it does is delegate the to the EntityManager using calls like em.merge(object) em.remove( object )

Continue down the road we chose and ignore User Tasks: